Budapest, you were grand. We arrived very early, hours before check in, but headed straight to our hostel to drop off our luggage. Immediately, we started making friends. The hostel we stayed in was what you might consider a “party hostel.” It was called Unity Hostel at Udvar. I highly recommend it. We met two ladies that would soon become our partners-in-crime, LeAnn and Tara (England). Then when breakfast was served, we met a lovely lady named Lily (Australia) that was also Danielle’s bunkmate the first night. Lily soon introduces us to all of her other friends, Jodie, Claire, Merrill and Gigi (Canada), and Jeff and Rich (US). Though it was first thing in the morning, they had already all planned to go on a party boat that evening and invited us along.

Fun Fact: Jeff went to go cook an egg in the common kitchen and set the fire alarm off in the whole hostel at like 8:30 am. Twice. It was hilarious. 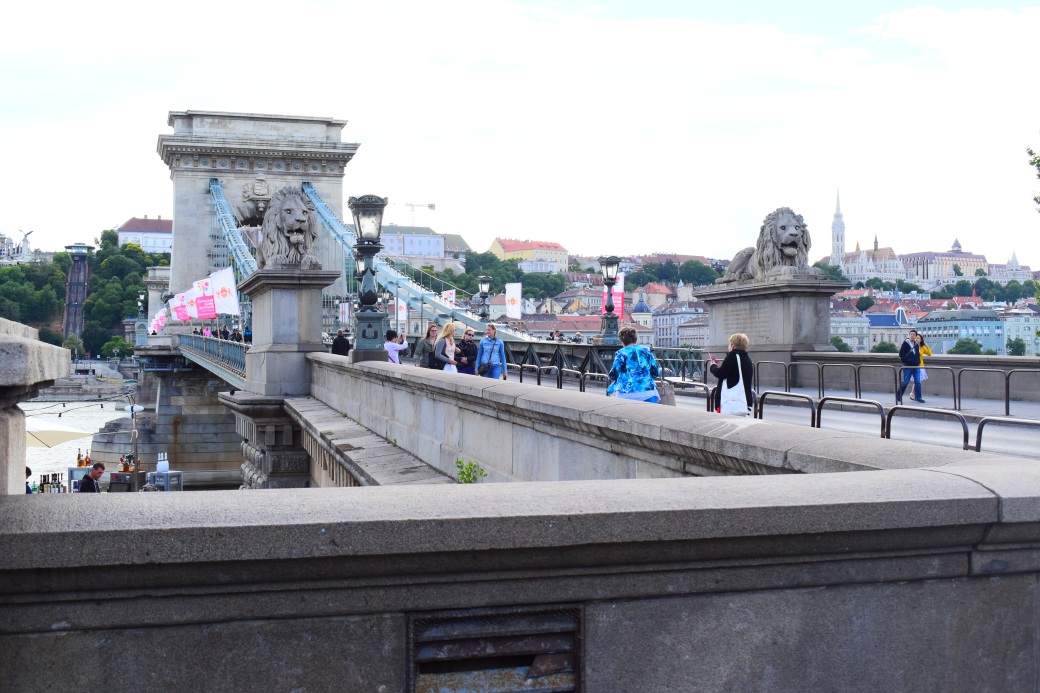 After breakfast, Danielle and I decided to nap on the common room couches, but apparently Sam woke Danielle up by pressing squeezing her nose. They went to go buy socks, while I stayed passed out on that couch for a good three hours. I awoke to a group of about 15 obnoxious British boys in their early twenties arriving ahead of check in as well. Soon after, Danielle and Sam returned and we got to move into our rooms.

Upon entering our room, we met a Mexican-American girl our age named Lisa who had just finished studying French in France. This tri-linguist really hit it off with Danielle who speaks the same three languages. Also, the fact that she was American made her super relate-able. We went to lunch at an Indian Veggie Bar and brought Lisa along.

When we headed back to our hostel, it was just about time for two back to back video interviews in Hawaii. (If you didn’t read my last blog, guess who’s moving to Hawaii in August?) The fellas at Kamaile Academy seemed to love the fact that people were passing by constantly, and got a kick out of me telling them that the common area was a bar and even more chaotic than my current location. I loved how many of the girls who had overheard things going on came to ask me how I felt it went and said that I sounded like I kicked butt! I guess I did, since I got the job.

After the interview, our group started getting ready to leave for the party boat! We walked about a mile together and the night began. The boat was all you could drink, but had a ferociously long line. Being in a big group totally had its perks because we each grabbed whatever we could carry and began a giant pile of backup drinks on the corner of the deck. Other people thought it was hilarious that we were hoarding drinks at an open bar, but those Canadian girls were all about efficiency. We danced and sang and drank for a few good hours, not losing anyone from the group. At the end of the boat ride, we all got free admission to this amazing club in downtown Budapest. It was wild. Our group survived but we ended up in small groups, which was pretty hilarious the next day. I could have stayed in that club all night.

(view from the boat)

On our way out, we met a boy named Ashton. Danielle, Rich (the real MVP) and I were discussing our plans when this tall blonde Brit came up to us and asked if we knew where the nearest bathroom was. Danielle and I’s response was to build him a human wall while he peed on the street, forever earning him the name Ashton the Pisser. Instead of getting food together, Rich went back to the hostel, while we started talking to a load of hilarious British guys in the street. A few girls showed up as well (from America and Iceland), and all of us ended up on pedicabs back to the hostel. What a trip. We hung out in the hostel bar until they closed at 4, then chatted for a few minutes outside. We were in bed as the sun was coming up.

The next day, Sam said she had had the best night of her life. Watching Netflix in bed and going to sleep earlier than she had since we arrived in Europe. Oh, to be 16.

Danielle, Sam and I spent our last day together walking around the city and getting to know some of the new hostel mates. We went sightseeing to some of the important building in town, like Buda Castle and Parliament, though Danielle and I had already gotten to see them lit up the night of the party boat. Two very silly British boys arrived, Harry and Ilir – never to be forgotten. We also got better acquainted with an Australian guy named James who was a real riot and a girl from Frankfurt named Conny that was a real sweetie. (I also spent about an hour and a half reading over my 54 page contract to sign and send back to FoodCorps.) 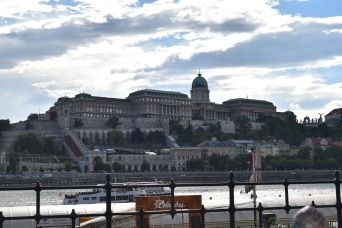 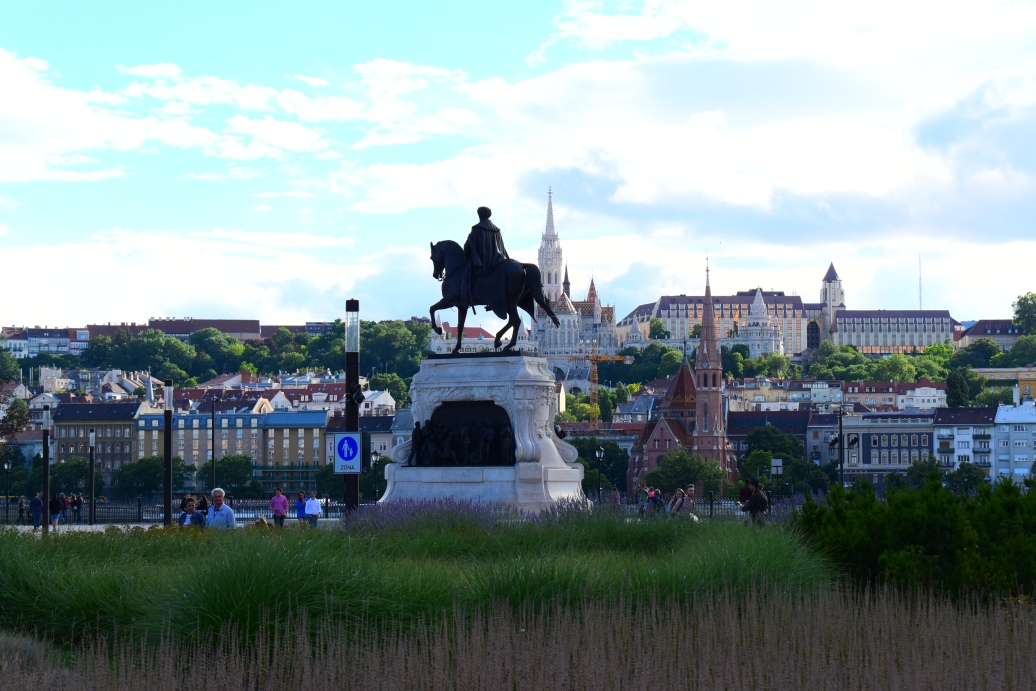 For the evening, we had originally planned on going on a pub crawl, but were a bit late because our whole room started playing a very intense game of Never Have I Ever. Instead, we decided to create our own pub crawl with about 20 people (now I understand why there are so many people working on pub crawls – it’s like herding cats). We even got a round of free shots at one bar because they thought we were legitimate. We still had a great time, ending up in another club and dancing the night away. The only trouble anyone had was when Tara and Ilir got lost and couldn’t find their way back to the hostel. Leanne and I ventured out into the streets, walking past clubs still open at 5 am, to find these lost children and return them home. It’s pretty hilarious to think about now, but at the time, we were very exhausted and it was starting to rain.

The next morning, Danielle and Sam had to check out of Unity Hostel Udvar to catch their flight back to the Netherlands as part of their journey home. Though I had originally planned on saying goodbye and going back to sleep, my heart beats for these ladies so I got up and had breakfast with them. We went to three different restaurants before we found one that would take a credit card (Danielle and Sam were out of Hungarian Forints by this point). We stumbled into an adorable spot called Vintage Garden for some fancy feast.

After breakfast, I helped my Colombian sisters load up their stuff into their car and saw them off. I miss them already, but this next part of my journey is why I left America in the first place. Like a close friend of mine said to me recently, “as you travel solo, being totally responsible for yourself, it’s inevitable that you will discover just how capable you are.” 😉

I told Danielle and myself that this night, I would not go out. I would not drink. I would not hit the dance floor. (I never should have said any of that).

Upon returning to the hostel, now alone, I needed to figure out my way over to Athens so that I could catch a flight to Cairo. Because of the expense of flying direct from Budapest to Athens, I ended up booking a 12 hour bus ride from Budapest to Sofia, Bulgaria and a flight from Sofia to Athens. Though this journey would consume much more time, it cost less than a third of that direct flight.

Once my tickets were in order, I decided I needed to go buy a real backpacker’s pack. If you didn’t know, my suit case broke my first day travelling, and I had sent the backpack my sister got me back to the States with Danielle. Rich, Jodie and James accompanied me to nearby store called Dockyard where I purchased the biggest pack they had and a pair of walking sandals for my aching feet. Once we returned, I spent for.ever. repacking my stuff into this pack. It all fit, condensing me from two bags to one, though much heavier now. Once it was all packed away, I hung out in the common room for a while with my pals. There was a nice Australian boy named Louis there who mentioned he had just gotten a hair cut. I had been meaning to get a hair cut, which I said out loud. Immediately, Rich wanted to cut it. No offense to Rich (who had never cut a girl’s hair before in his life), but I said hell. no. Instead, the lovely Conny did it, right there in the hostel common room in front of our friends. I love how it turned out, it was free, and it makes for a great hair cut story.

Peer pressure kicked in and I decided that instead of spending my last night in Budapest resting, I would go out once more with my new friends. While everyone else started splitting off in pairs, Louis and I discussed all sorts of things like politics, traveling, the most appropriate film (Eurotrip) and Panic! at the Disco. I was so pleased when he decided to belt out a few lines from A Fever You Can’t Sweat Out. We eventually regrouped and walked back to our hostel, but first Leanne and I picked up some falafel. We ended up in the common room, followed by Harry and Ilir. Harry was drunk and loud so the man told us we had to leave, which was kind of embarrassing but mostly hilarious.

From here, Leanne, Tara and I spent a while giggling in the bathroom before hitting our pillows and falling right asleep.

The next morning, I had to get all my things together to check out. So did Leanne, Tara, Harry and Ilir. After we were ready, I accompanied Leanne and Tara to the train station to book a ticket to Poland, then the three of us went to Kiraly Baths bathhouse. It was so refreshing and just what I needed after two weeks of traveling. Earlier Harry and Ilir had asked us what bathhouse we were going to, but told us this one was no good. Low and behold, they were there when we were – basically, they just wanted to know where we were going.

(Leanne and I at the entrance to the bathhouse)

After a few relaxing hours, we returned to the hostel to gather my things. Tara, Leanna Rich and I hung out in the common room for a bit, eating leftover falafel and never wanting to say goodbye. Rich walked me to my metro station and saw me off to venture through the unknown.

I will never forget my time in Budapest or these amazing mates I have made. You guys rock!

Amidst major life changes, I have decided to go travel the world. This blog is dedicated to retelling the tales of my excursions and exploring the cultures through which they occur. Follow me on this journey! View all posts by FloridaGirlAbroad